Through its broad range of initiatives, RACA also supports young people, colleges and educational institutions by providing unrivalled programmes and apprenticeships through its extensive network of contacts and members while raising the standards and awareness of food, food provenance and sustainability, cooking and service. Established in 1980, the Academy was granted the Royal prerogative by Her Majesty The Queen in May 2013. This was recognition of its pre-eminence as Britain’s leading professional association. The Academy is immensely honoured to have His Royal Highness The Prince of Wales as its Patron.

The Royal Academy of Culinary Arts (RACA) aims to advance the education of people in the United Kingdom in the science and art of cookery, food, food provenance and service. This objective is achieved through a number of activities including: The Royal Academy of Culinary Arts invites you to join us for an evening of indulgence... King's Fine Foods Caviar...

It is with enormous...

This is a grey start to 2021 when we have lost another of our greatest culinary treasures.  Albert Roux OBE... 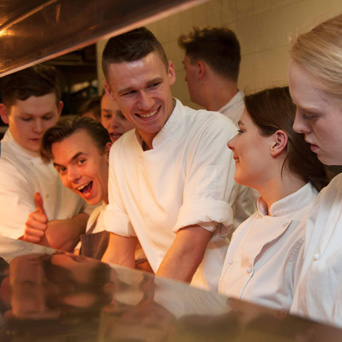